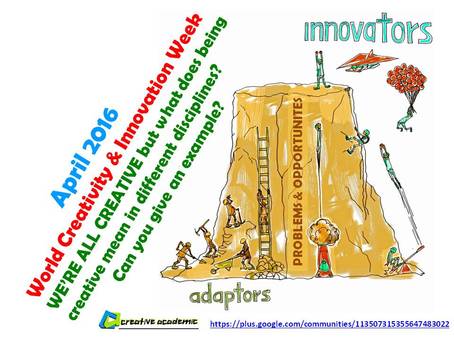 April was dominated by World Creativity & Innovation Week (April 15-21) which Creative Academic participated in for the first time. In fact our involvement extended for several weeks before and after the event. Thanks to many people who contributed to our projects, our three contributions #LTHEchat Twitter conversation, Creative Academic Magazine (CAM4a) and our week long #creativeHE conversation (reported in CAM4b) were well received and also recognised by the organisers. Throughout the week and before and after the event we also promoted WCIW through Twitter and Facebook and after the event Jenny Willis helped the organisers of WCIW to gain feedback from participants.  Thank you to everyone who contributed and helped make a difference.

Thanks so much for all of your help to spread the energy and the word about World Creativity and Innovation Week April 15-21 (WCIW 2016)! WCIW 2017 is our 16th anniversary and it would be great to double, triple, quadruple our reach so everyone on the planet can engage in meaningful ways. WCIW experienced tremendous online growth in 2016. Coverage in Innovation Excellence, Creative Academic and The Banff Centre's blog likely helped. This year 25 countries (down from 26 last year), that we know of,  participated in 72 (up from 57 in 2016) different celebrations. See wciw.org/wciw-2016 for specifics; scroll through the blog posts too. 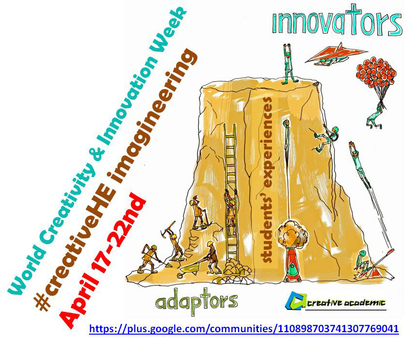 #creativeHE 'Imagineering in HE'
Imagineering involves using imagination to create ideas and invent possible ways in which these ideas might be implemented. The context for this imagineering event is the use and enhancement of teachers' and students'  creativity in higher education.

This online event was part of Creative Academic's contribution to World Creativity & Innovation Week which we are undertaking in collaboration with Chrissi Nerantzi (Founder of the #creativeHE platform) and the Centre for Excellence in Learning and Teaching at Manchester Metropolitan University. We are very grateful for Chrissi's support. Each day was underlain by a question to encourage personal inquiry and a short post to stimulate imagination together with an invitation to share ideas, feelings, experiences and practices in response to this stimulus.

Inquiries
What's it like to be creative?
What does being creative mean in your own practice or other life contexts?
Where do your good ideas come from?
What's it like to think like a designer?
What can we learn about creativity from the experience of a creative professional?
What can we learn from a teacher about encouraging & facilitating the creativity of other people? 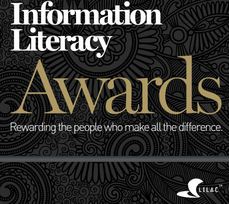 February 2016 #creativeHE almost wins CREDO Information Literacy Award
The  #creativeHE open on-line course designed and led by Chrissi Nerantzi was the focus for the January Issue of the Magazine.  Chrissi submitted the details of the course to the international CREDO Awards competition.  The Credo Digital Award Credo Digital Award for Information Literacy rewards an innovative/high impact digital resource developed by a UK or Ireland-based individual or group. Although #CreativeHE  didn’t win it came a very close second and received a highly commended tribute from the judges. WELL DONE CHRISSI AND THE#CREATIVEHE TEAM 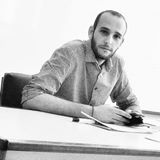 February 2016 'Our Creative Life' #creativelife on facebook
Inspired by his recent involvement with the #creativeHE course run by Chrissi Nerantzi, our newest team member Nikos has set up a Facebook Group 'Our Creative Life' to celebrate all the different ways in which we use our creativity in our everyday life. It provides a forum for anyone who is interested in how creativity features in our everyday life to share their personal experiences, insights and ideas. Nikos invites you to join him if you are a facebook user. 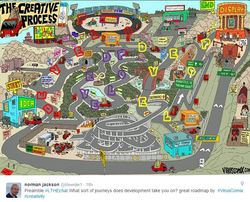 January 2016 #LTHEchat
Professor Norman Jackson facilitated a Learning and Teaching in Higher Education conversation on Twitter on the theme of Exploring Creativity in Development. Over 500 posts were made in response to six questions posed by the 70 participants and the results were storified by Chris Jobling. Norman also wrote a blog about his experience and created his own narrative 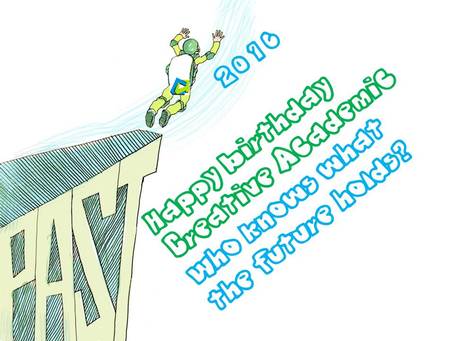 Creative Academic was launched in January 2015. One year on we have much to show for our efforts and much to be thankful for. Thank you to everyone who has signed up to our community of interest and enthusiasm for the thing we care about - the continuing creative development of students, ourselves and the organisations and societies we inhabit. The world is full of wicked problems and infinite opportunities and we need to harness all of our imaginations and talents to engage with them and make our lives and the lives of others better. Thank you to everyone who has visited our site, or read or contributed to our magazines, articles, blogs, tweets, surveys and projects. We have made a good start but our social enterprise will only be sustained with YOUR support and help. We look forward optimistically to the coming year and welcome your involvement. 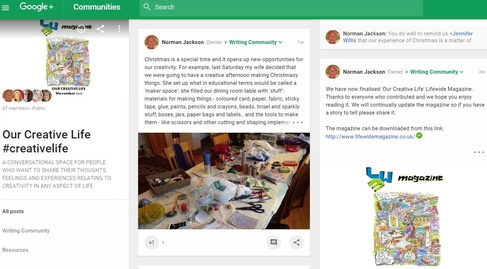 So many things in life emerge from the things we do.  In December we collaborated with our sister organisation Lifewide Education to crowdsource the content for its December Magazine on the theme of everyday creativity. We established a Google+ site for the writing community and attracted quite a lot of interest. It seemed like a good idea to carry on supporting this space to provide a forum for anyone who is interested in sharing their personal experiences of being creative. We are all creative and the digital world has only expanded the possibilities for our imagination and creativity. We believe in Carl Rogers wonderful ecological concept of creativity 'creativity is the emergence in action of a novel relational product growing out of the uniqueness of the individual on the one hand, and the materials, events, people, or circumstances of his life' (Rogers 1961). With this vision of creativity in our mind we want to grow our understandings by building and curating a collection of personal stories and perspectives around the theme of 'Our Creative Life'.  We welcome YOUR involvement in our project to grow our understandings. 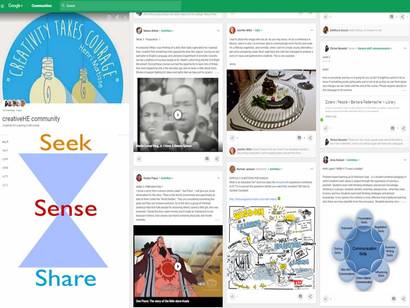 It is one of Creative Academic's ambitions to facilitate professional development relating to creativity in higher education through community-based on-line 'courses' so we were delighted to help facilitate Chrissi Nerantzi's  'Creativity for Learning in Higher Education' known as  #creativeHE. Chrissi Nerantzi, a founding member of the Creative Academic team, and a champion of open learning and education through the use of social media. The experience was invaluable in enabling other members of the team to learn how an online course using social media can be structured and facilitated. The January issue of Lifewide Magazine is formed around the content and learning from the course. 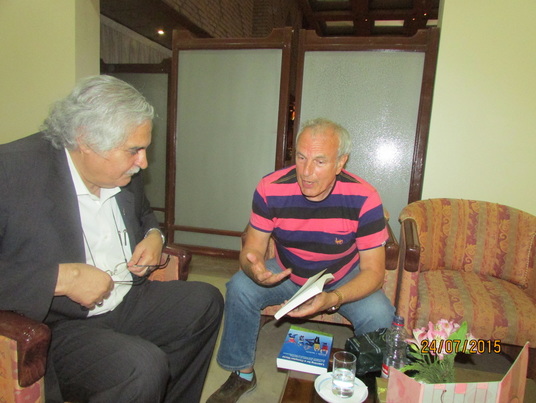 The recent agreement between USA, UK, France Germany and Russia to lift the sanctions on Iran provided the context for a visit to Iran by Professor Norman Jackson. During his visit in late July it was clear from the media and conversations with people he met that there was a great sense of optimism and hope that the political movement towards normalising relationships will lead to stronger links and cooperative relationships with European countries.

Professor Jackson had been invited to discuss Creative Academic’s work on encouraging and supporting creativity in higher education with Professor Farid Moore – a science professor at Shiraz University and newly appointed Director of Fars Province Science Technology Innovation Park with view to establishing a collaborative link.

Professor Moore outlined his own philosophy on higher education arguing that the future lay in a more interdisciplinary, trans-disciplinary approach to science education. He recognised that the traditional subject-focused approach was now inadequate for preparing learners for a modern world and that more needed to be done to encourage learners to see and appreciate the interconnectivity of the sciences in tackling the complex problems facing Iran. He illustrated his argument using his own field of expertise, ‘Medical Geology’ involves integrating science and practitioners from many disciplines (geology, chemistry, physics, medicine and epidemiology) to define and solve problems relating to the way certain diseases can be linked to the rocks, soils, water and air of a particular location. There were many examples of pockets of disease being linked to particular geological characteristics and conditions.

Because of his role as Director of the Fars Science Technology and Innovation Park he had now become very interested in the role of creativity in science education and research, recognising that while much good research was being done at the university, turning the results of such research into useful and commercially viable products and services was a significant challenge requiring creativity and enterprise skills and mind sets.

He saw that an important part of his role as Director of the Science Park was to encourage creativity to support innovation and enterprise and he recognised that this was a long term project beginning with undergraduate and continuing through post-graduate education and progressing into the people working in spin-off companies and projects. This interest had led him to the work of Creative Academic and an invitation was extended to Professor Norman Jackson to collaborate on developing a programme of workshops and Guides to begin this process with Faculty and postgraduate students.